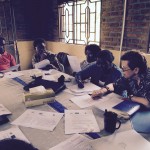 I returned 2 weeks ago from Rwanda where we have an on-going project focused on the re-entry of genocide perpetrators after prison into their communities. We have developed an intervention model that joins council practice (a process of deep listening across difference) and SRM’s self-regulation skills. During each of our trips we orient relevant people in public and private organizations to our model. On this trip we had meetings with several individuals in the Rwanda Corrections System, including the Commissioner General. Without exception everyone we talk with is enthusiastic about the potential benefits for prisoners as well as their communities.

This particular trip included a focus on training local data collectors. We will be collecting baseline data from 300 prisoners in 3 prisons. The data is both quantitative and qualitative and will provide much needed information about the challenges facing the prisoners as well as their strengths. It was heartwarming to see 10 Rwandans who are partners with us in this work reviewing the data forms, translations, and data collection processes.

A warden from one of the prisons attended our meeting. She wanted to be sure that our methods would not cause distress to the prisoners. She said, “Our prisoners are delicate and we must be sure they are not distressed.” Hearing this concern from a prison official was impressive. As I spent time in the prison outside Kigali I observed wardens (we call them “corrections officers” here in the U.S.) patting inmates on the back and walking with an arm slung around an inmate’s shoulder. It was clear that the relationship between wardens and inmates is not as strained as those in the U.S.

I asked about the safety of our data collectors, who will be going into the prisons alone to work with groups of prisoners as part of the data collection. Any one I mentioned my concern to looked bewildered that I would be asking such a question. Apparently, there is very little violence in the Rwandan prisons. Inmates are not confined to cells. They sleep in dorms and can freely walk around the prison compound. There were no bars on the windows in the prison we worked in. We saw visitors who came and stayed a long time in the prison common area. 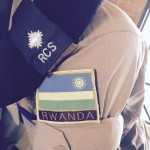 What makes the difference in Rwanda’s prisons? Why is there so little violence and recidivism? Some of the difference must come from their philosophy of imprisonment…you did something bad but it doesn’t mean that all you are is a bad person. The President of Rwanda, Paul Kigame, reflects this when he says,” We are all one people”…these people served their time, now they can be accepted back by all Rwandans.

Remember that the prisoners returning to their communities are perpetrators of large-scale genocide. It seems like a huge expectation that communities filled with survivors and who lost children, spouses, friends, and neighbors will be able to move forward as one people. Could I do that? I hope so, but I’m not sure.

I think there is much that we can learn from the corrections system in Rwanda: How can we foster a different relational quality between corrections officers and inmates? Is it possible to re-orient our philosophy of imprisonment from punishment that can be extremely punitive, with days, weeks and sometimes moths spent in solitary confinement to rehabilitation? What can be done to make our system of jails and prisons one that is not so toxic for both COs and prisoners?

In our partnership with John Jay College of Criminal Justice we are working to address these questions. Currently, we have a focus on Correction Officer wellness. Did you know, for example, that the life expectancy of COs is about 58 years old? And, as one study found, their suicide rate is 39% higher than the rest of working age individuals. One study has found that 27% of COs suffer from PTSD. This is a population in distress.

Our model builds hardiness and resilience by using neuroscience-based skills. In the field of corrections there is a great need for intervention models that restore hope, rebuild relationships, and promote dignity and principled behavior. 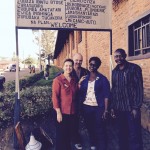