Recently, I was fortunate to participate on a panel at New York City’s Federal Reserve Bank in honor of Veterans Day. The bank has had a veterans network made up of employees who served in the military for many years now. They sponsor programs for their employees to not only sensitize them to the challenges faced by returning vets and the many strengths they bring to organizations post-deployment but also to engage employees 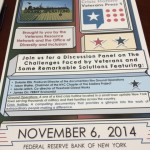 in services and activities for vets.

One of the panelists, Dulaney Ellis, produced and directed the documentary film “Ground Operations.” The film tenderly shows veterans from the OEF/OIF wars learning about the joys and complexities of modern farming from retiring farmers (the majority of today’s farmers in the U.S. are near retirement age) and their peers about sustainable agriculture. The film lovingly captures the healing power of working the land and caring for the animals. One veteran’s sentiment reflected a profound truth when he said, “It feels so good to be a nurturer rather than a destroyer.”

The film highlighted for me, once again, the essential need for programs that are based on relationship, particularly of peer-to-peer, non-clinical relationships. The ones that often don’t cost a thing. The ones that don’t require an intake interview that may heighten your dysregulation and drive you away from services. The ones in which you can give back to others in the informal way that you received them from your peers. In the film, watching the new vets learning from and being supported by those who had been in the program longer the power of community shines brilliantly through. Seeing the seemingly casual conversations under a tree or while picking vegetables that become potent sources of healing can remind all of us that the human mind-body system is wired with the potential for resilience. And, one of the strongest builders of resilience is social connection.

Certainly, there is a need for clinical programs for returning veterans, but in a triage approach the first and foundational service needs to be connection to peers in your own community. A connection that breaks down the sense of isolation and separateness, that restores camaraderie and mission focus, and reminds you of your strengths and potential. We have reified clinical treatment to the neglect of community-based programs and our veterans are suffering as a result. We need a full arsenal of tools to address the impact of multiple deployments, of the multi sensory horrors experienced during combat, and of the profound losses of life, limb, and sense of self. It is inspiring to have seen the restorative power of community in action in “Ground Operations.”